I hope that all of you are staying warm considering that most of the country (with the exception of my sister in California who I'm thinking evil thoughts about as it's warm there) is experiencing some pretty bizarre weather.  Global warming??  I think quite the reverse.  It's been miserable around here - lot of missed school days, subzero temperatures, snow, but the big thing is the miserable cold - days and days of it!!  We've already hit an all time record for snowfall for January and I wouldn't be surprised if we don't hit the coldest month on record either.  Spring just can't get here fast enough.  I've barely left the house, but instead of having cabin fever, I've been having crafting fever.

I finished up the Hitchhiker Scarf and I'm really pleased with the way that it finished up.  I was concerned about the yarn, but I love the end result: 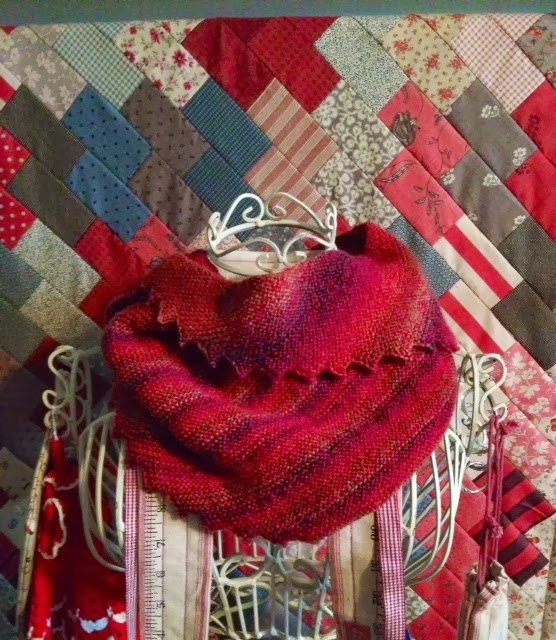 And if anyone is interested, the quilt hanging behind it is a Schibbles Pattern called Recess that I made a while ago (and it still has to be quilted).

I also managed to get a couple quilts finished!!  The first one is an older quilt that I started a while ago and then ditched in pursuit of something else (I have a bad tendency of doing that).  But it's finally finished: I'm not sure why the pattern is called Wisdom of the Heart as I don't see hearts in the pattern, but that's the name.  You will also notice my trusty pal, Bailey, waiting for me to turn my back so that he can lay on it!  He thinks that the things that I make are for him!!

I also finished up my Peaks and Valley's quilt: 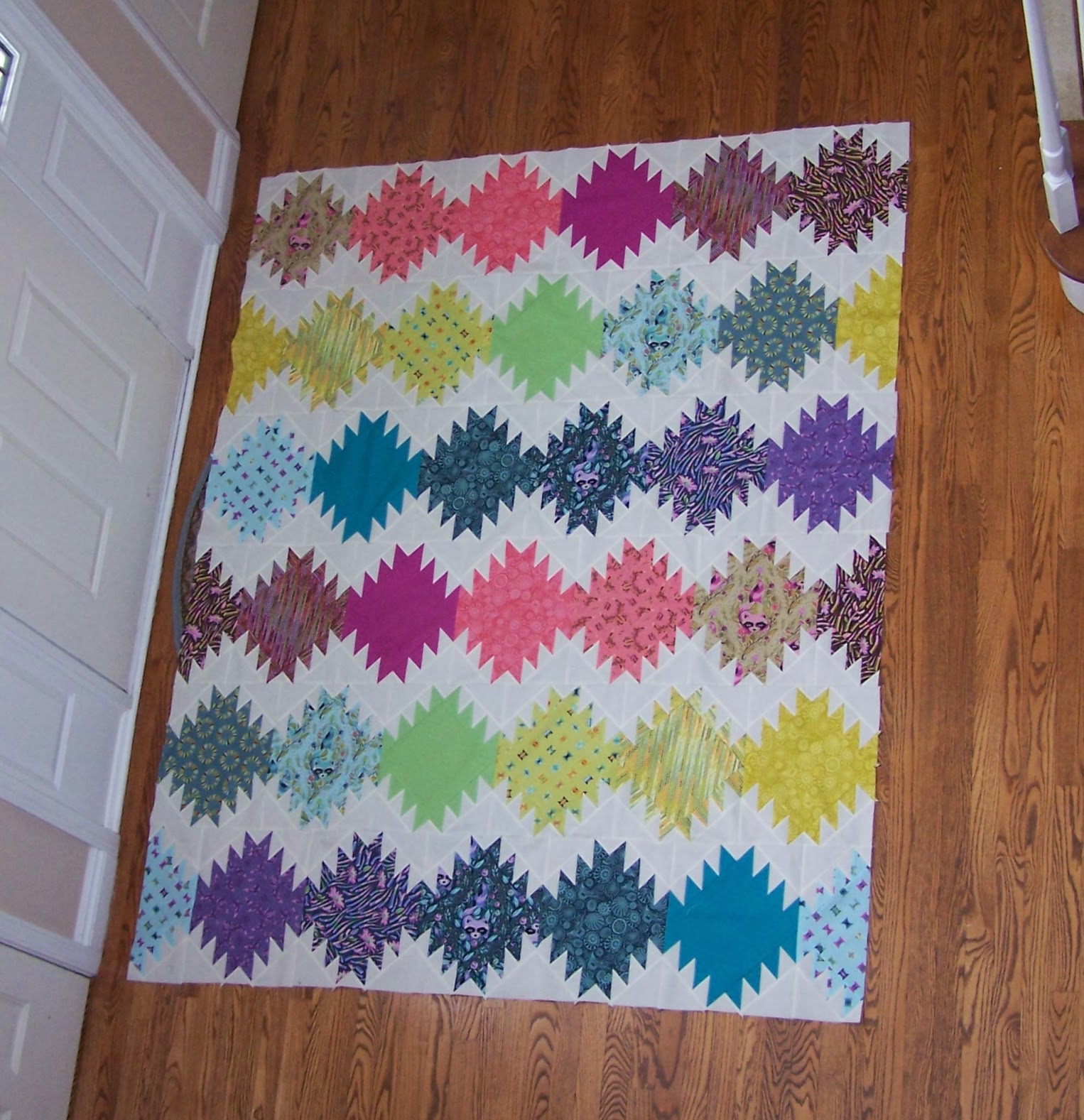 This was really a quick quilt to make - although as usual I dragged my feet with it.  I'm deciding if I should add a border or leave it as is.  The finished quilt in AP&Q didn't have a border, but I'm still on the fence.

Stitching still isn't happening around here - Sigh!!  I think about it, look at the few things that I have on rods, but it's just not calling my name yet.  I seem to still have my knitting mojo going on and have been working on the Rococo Shawl: 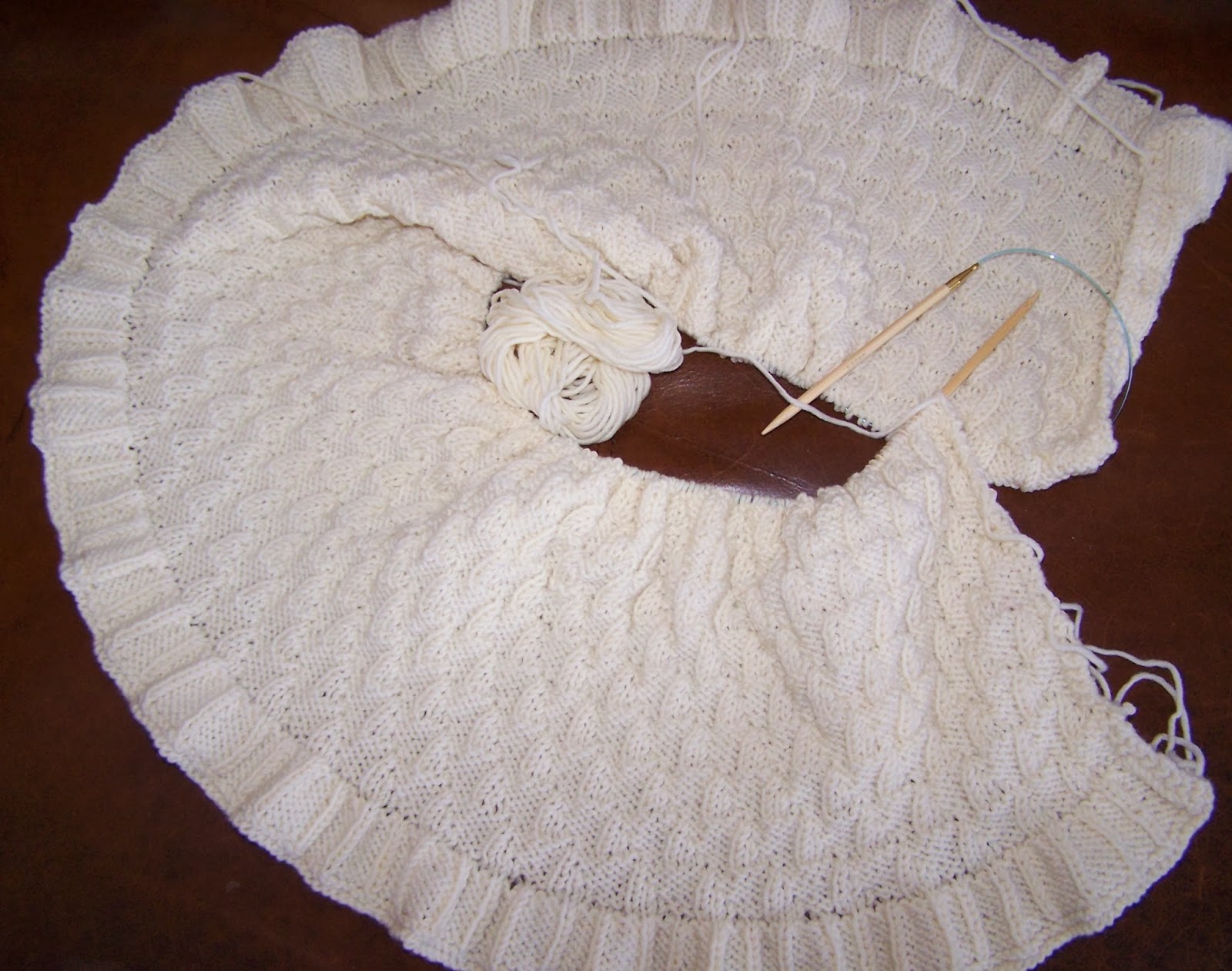 It's growing slowly.  There are a lot of stitches in those rows.  I also started another scarf - the Linen Stitch Scarf - but as you will see there is no picture.  I've been having one problem after another so no picture unless you want to see a tangled mess of yarn.  After three attempts (dropping cast on stitches and not getting them back on right), someone pulling half the row off the needles (I won't mention names), I really got going on it only to discover that something was off on the gauge.  Well, a lesson learned - while I thought I was using the correct needle - and the package said it was the right needle - it wasn't.  Seems that needle companies aren't uniform with their needles, and what I thought was a Size 6 was really a Size 5.  And a trip to the knitting store confirmed this after we tested a half dozen needles.  So advice here - check your needles!  So now I'll cast on again - the darned thing isn't going to defeat me!!

So that's been my January.  Maybe I should be happy that it's been so cold around here and I've stuck around the house more.  The winds are still blowing and the temps are still miserable (all of 14 degrees with a windchill of -4), so I think I'll tackle something else.  Up next - cutting out these lovelies!! 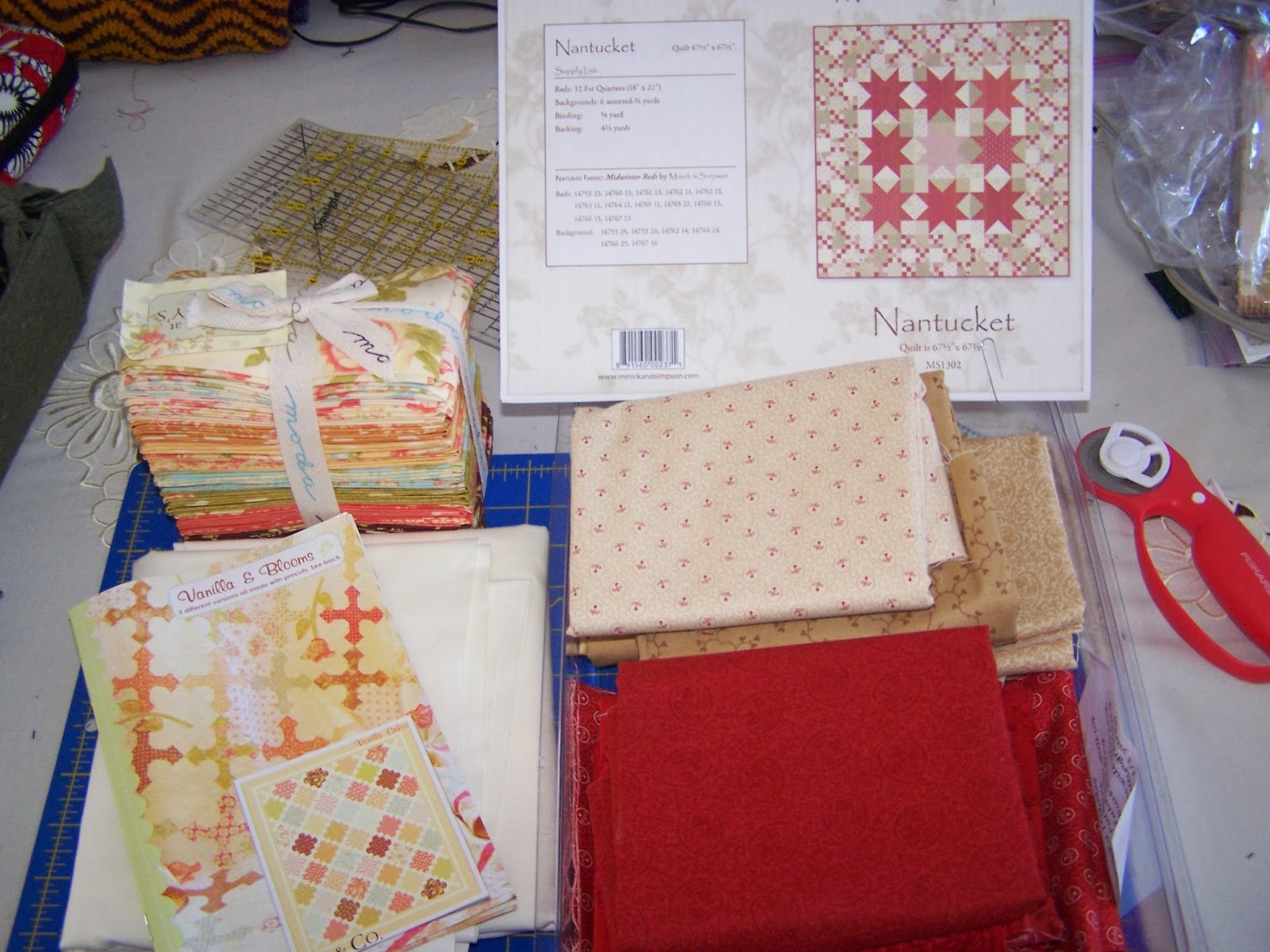 The Midwinter Reds fabrics seem appropriate for this time of year, don't they?  Vanilla and Blooms makes me think of Spring, so I think I've got some fun quilting time ahead of me.  Maybe it shouldn't warm up after all!

Hope you're all staying warm and thank you for stopping by and for your wonderful comments!  I always love hearing from you!!
Posted by Deb at 9:44 AM

Beautiful scarf! All your projects make me want to quit my job and stay home to quilt or knit.

Oh Deb, your Hitchhiker scarf came out really lovely. I'm sure that your Sister will love it. Love your quilts. You never know the stitching bug will come back before you know it. You'll wake up one day and think "I need to stitch".

beautiful work!` I am ready for spring

Wow! You have accomplished a lot! I really like the Peaks and Valleys. Nope, I cannot warm up at all.

Love all your finishes and your Rococo Shawl is coming along beautifully. Given that severe weather you've been having you've been making the most of being stuck at home! Hope it warms up soon!

Beautiful finishes and the fabrics in your new start are really pretty. The weather here has been really cold too - well for central VA, for you and most of the country it would be downright balmy.

The amount of cutting and stitching and lining up and then all that quilting just makes me dizzy. So much work but what worthwhile results.

I think the cold has energized you! What beautiful work. Love that red scarf and your quilts are amazing.

Cold here in DC too, but not I think we are due for a little reprieve this weekend. Hope so. I'm tired of looking like a penguin in all these layers.

Your scarf is beautiful as are ALL your projects well done.

You ready have been busy while keeping warm in the house!

Wow, that rococo shawl is getting big! No wonder it takes so much yarn. lol! I love your next projects! I had to order that Vanilla & Blooms pattern -- I love it! Love those reds for Nantucket too! And of course all your finishes are great!

I think that everyone has had it this winter. It will just make spring that more magical.
The hitchhiker scarf is gorgeous. The quilts are lovely too.

Me and My Stitches said...

Really love your scarf! The temps have been super cold here too, but we haven't had that much snow. Keep on quilting - you're finished projects are beautiful, and I love the new ones too!

Deb...love that scarf! And your quilts are beautiful. I can't believe that gorgeous shawl. You work is wonderful!

Deb, I see lots of beautiful things - you've been busy! I can just imagine how cozy that scarf is and that shawl too. Wish I could knit like you!

ps I love seeing Bailey in the photo. Is he bored with the cold weather?

Such pretty knitting!!
Love your quilt finishes and new plans too.

Great knits and quilting Deb! Good to see a post from you. Stay Warm! Us Californians can't control the weather. We want rain but it won't come.

What beautiful finishes! Your quilts are wonderful. I hear you about this winter weather. I am sick to death of it too!!

I always enjoy your posts!

I hope you thaw out soon up there. I'm not quite sure how you manage the arctic temps up there. I can't handle it here in Florida.

I knew you'd love Nantucket the moment I saw it!

It is great to see you posting again! I love the quilts and the scarf!

A gorgeous, lovely scarf! And two stunning quilt tops! You are tops on the lot!! :) And yes, winter has been totally miserable and we are due for more ice and snow tonight :(

You have been busy making some gorgeous things. I love seeing your quilts. I agree, that Midwinter Red collection is wonderful.

Seems like climate change is affecting all of us this year one way or another, we've just had the wettest January on record in the UK.

You are going great guns at your projects! Hitchhicker is gorgeous and your quilts ate lovely. Great progress on the shawl

Hmmmm, the title says it all. And it's definitely the time for knitting, knitting shawls and socks and mittens. And your new shawl has a wonderful colour, just perfect for all the white outside.
And it's also a time for quilting. Your have finished two great quilt tops, and two wonderful projects are lying before you. With great patterns and fabrics. I'm looking forward to seeing your progress on them.

Your knitting is so beautiful! I love your quilt that you finished as well. So many wonderful projects!
I love the Fig Tree fabrics and pattern you have sitting there waiting for your attention. I hope that you have had time to work on them.
It's so great to see what you are working on. Thank for sharing dear friend!
Talk to you soon!

Love your Hitchhiker Deb - I truly must do one of those myself. That Rococo is stunning - wow - what a project. The quilts are all gorgeous. Maybe your long hard winter is a good time to get back to your rug hooking? Got my package - sorry I couldn't locate your email address to let you know but many thanks my friend - Hugs Mel

Totely diffrend, the quilts you made, but both are so beautiful!

I hope you'll share a picture of your finished Nantucket. I've had that pattern for forever ... but unfortunately, there are other quilts to be made first. Some day ...

I love your projects that are keeping you happy here! Your new projects are going to be fun too! I have Vanilla and Blooms... hope to start that soon also! I hope your weather is getting better there!

I love that scarf! The edging on it is great! And your quilt is beautiful!

Hi Deb, I just love your white shawl :)
I hope you are doing very well and I wish you a nice week,
Hugs,
Isa

Your projects are so beautiful. What are you working on right now? 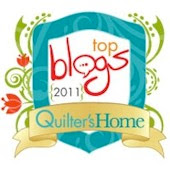 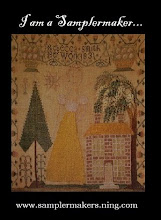 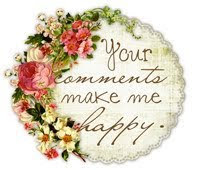